YOUR ANCESTRAL ALLY IN WELLNESS

We are very excited to be offering Kambo to folks in and around Austin, Wimberley, San Marcos, and the Texas Hill Country. This ancestral frog medicine has been a strong ally in wellness for us in our own lives and spiritual practices, and we wanted to share a bit more about why we love the Kambo frog medicine. 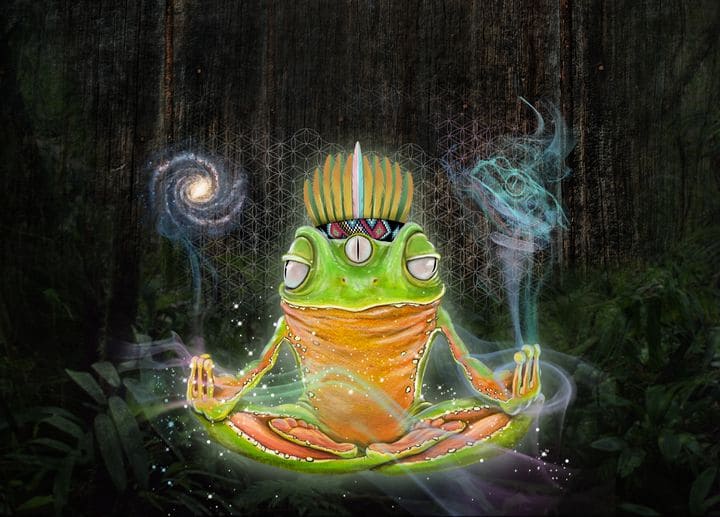 Kambo is a non-psychoactive sacred earth medicine from the Amazon jungle. It comes from the secretion of the Giant Monkey Frog (phyllomedusa bicolor), and has been used for millennia in the Amazon Basin to help cure and prevent disease, clear negative energy, increase fertility, and help give hunters strength and endurance.

There are many different legends about the origins of Kambo. The one I am going to share with you is not only my favorite and most amazing, but (after drinking Ayahuasca) is the most plausible to me. I will share it with you as it was shared with me.

Long ago, deep in the jungles of Amazonian Brazil, a tribe was in trouble. Many of the people were getting sick with malaria. Many people had died, and the malaria parasites which spread through mosquito bites, were infecting more and more people each day. Their medicine man, Kampu, was trying everything he knew. Unfortunately, none of the innumerable trees, herbs, and other natural remedies he tried were working.

With a heavy heart, he sought guidance from the wise Grandmother, Ayahuasca. She showed him a vision where he was walking through the forest following the sounds of a frog. When he came to the tree the song was coming from, he climbed up and found a green amphibian. He asked the frog to come with him, and took it back to the village. He gently collected the slimy secretion on the frog’s skin and placed it on a piece of wood.

In his vision, he saw himself mixing the frog’s dried secretion with water and making little balls on the wood. He watched as he made small, superficial burns on the skin of his sick tribal members. His patients came to him having fasted and with their stomachs full of water. He applied the frog’s medicine to the burns, and he watched the people purge out their sickness.

Relieved by the vision, and knowing the cure had been shared with him, he awoke the next morning to make the vision a reality. The frog medicine not only cured the people suffering from malaria, but acted as a vaccine for those who had not gotten sick yet.

It is said that as Kampu passed to the next world, his Spirit came to live with the frog, and his knowledge of healing now resides in the medicine now known as Kambo. 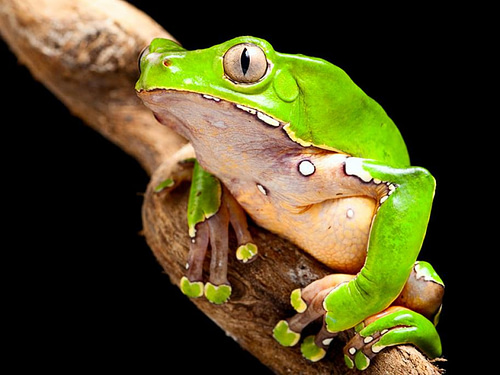 How I Came to Meet The Frog

I came to work with Kambo through a dream. I had heard of the medicine before, but really knew nothing about it beyond its existence.

I awoke one morning from a dream, where I was emailing someone to schedule an appointment, and as I wrote the email, there was a green frog sitting on my laptop. I had a knowing that this was a message from Kambo that it was time for us to meet.

So I did some Googling, and found only one person in my area that served the sacred frog medicine. After a few emails with the Kambo practitioner, I was heading to my first session.

My first meeting was intense. I did a lot of purging, crying, and wondering why I was doing this to myself. Self-criticism, feelings of inadequacy, and self-doubt began to bubble up to the surface. I recognized these feelings, but they had been buried deep within for a long time, and it had been ages since I felt them in their full force. 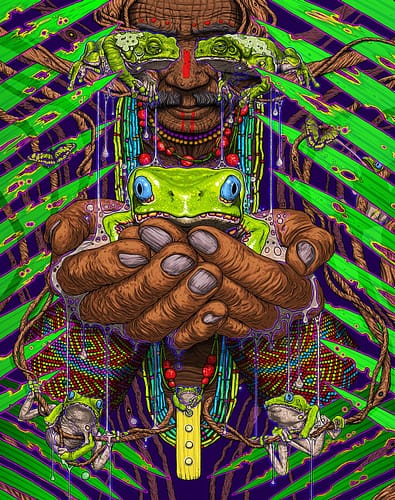 As each of these negative feelings bubbled up, I could feel them nauseating me. Then, one by one, I purged them. I felt so relieved to have them out. I heard a voice tell me, “Now you can choose if you bring them back or not.”

I left the session with an emotional hangover, exhausted from exorcising long forgotten troubles.

I went to bed early that night, and slept for 10 hours. When I woke in the morning, I felt a clarity and lightness I hadn’t felt in years. I felt clean, strong, and excited to be alive.

I continue to sit with the Kambo frog when I need to be picked up from feeling run down, and when I need reminders of what it is like to be clear and focused. Kambo gives me the boost I need in energy and immunity to keep a steady pace on my path, and helps bring attitudes, beliefs, and emotions that are no longer serving me to the surface so I can release them.

Kambo has become a major ally to me and a regular part of my holistic health toolkit. As an added bonus, when I meet with the frog regularly, my immune system is strong and I have yet to get sick. In fact, since beginning work with Kambo, I have felt the beginnings of a cold coming on a couple times. I may feel run down, or have a day where I feel the chills, or have a sore throat, and each time it never goes any further than that.

I am very grateful for my relationship with this beautiful medicine, and believe in its healing power so much. It is with great joy that I can share Kambo medicine with those that are seeking it in the Texas Panhandle and Amarillo areas.

How I Work with Kambo

As I have worked with Kambo, my relationship with it has deepened, and so has my understanding of how it works best. I have had many Kambo ceremonies where I have received, or given myself, a large dose. When I first met the medicine, I saw taking a large dose as required to receive the healing I was looking for. As I’ve learned more from the medicine itself, I’ve come to see this as unnecessary.

As you would expect, a higher dose is going to be a more intense experience, and leads to more difficulty during the session. It also lengthens the amount of rest time needed afterwards to feel the benefits. I approach Kambo with the same respect as I approach all the sacred medicines, and have come to believe in the sweet spot of the minimum effective dose. I like to give just enough medicine to help cleanse, but not enough that my clients are wrecked for hours afterwards.

Having a “if some is good, then more is better” attitude really doesn’t fit with this medicine (or with most other things for that matter). It’s very similar to exercise. Going to the gym for an hour is good for us, but working out for five hours leads to greatly diminished returns. For the workout to be effective, we need to be able to recover from it just as effectively.

As with any sacred earth medicine, I always recommend starting slow. We are building a relationship with these teachers. So, as with any relationship, it always advised to get to know someone over time. I provide personalized consultations for each of my clients, so we can decide together what the best plan is for you to achieve the experience you want.